Design Africa - We Are Africa

Find out more about the Design Africa SHORTLIST HERE 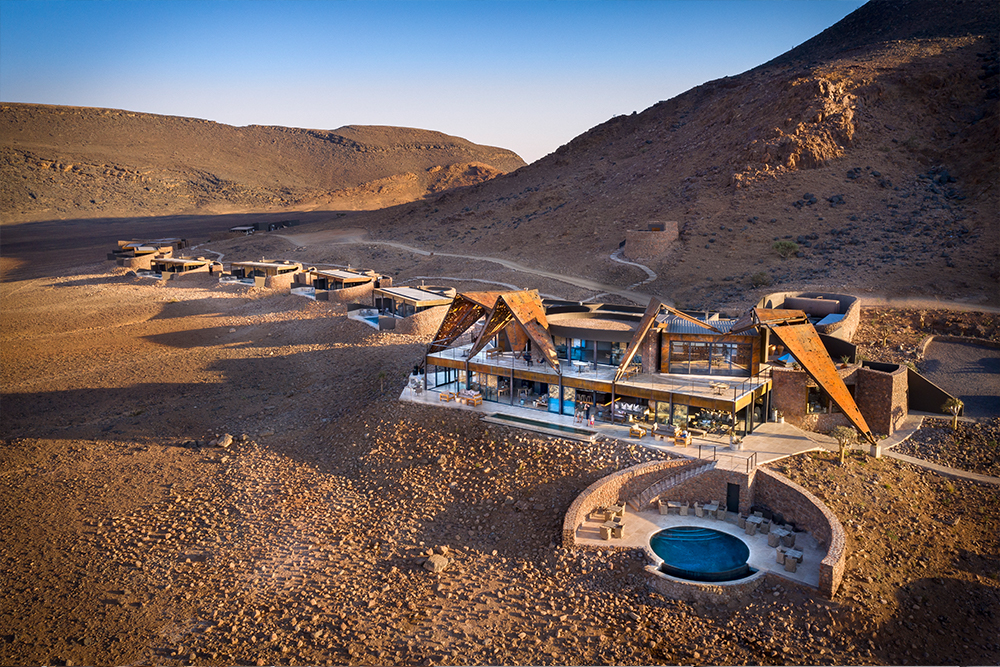 andBeyond Sossusvlei Desert Lodge is situated on a private concession in the Namib Desert. The design is inspired by the natural surroundings – shapes, changing colours, expansive views and minerals. 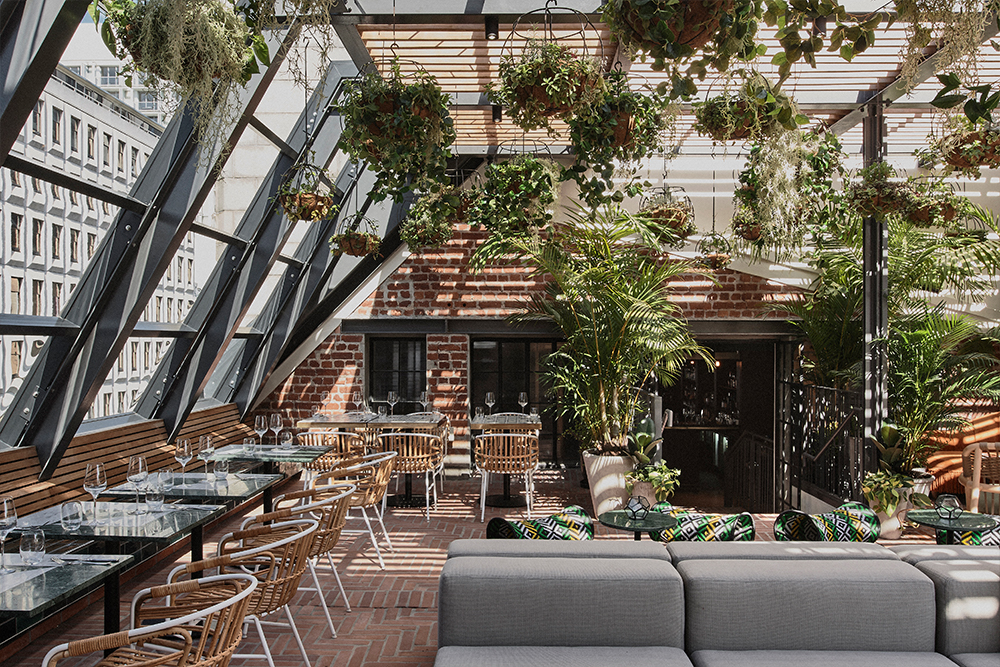 Created from two beautifully restored heritage buildings, one Art Deco and the other Edwardian – originally stitched together in the 1940s, Gorgeous George is the first to join the Design Hotels™️ stable. 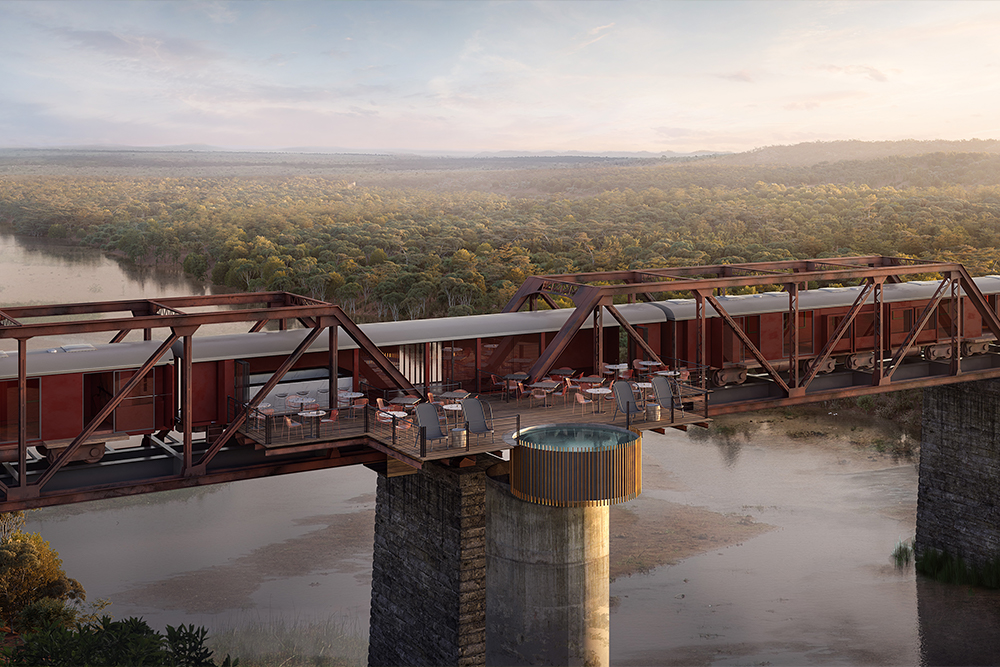 The train on the bridge

Kruger Shalati Train on a Bridge is a new product set to open in 2020 in the Kruger National Park which will further establish South Africa as a leader in the luxury tourism space. 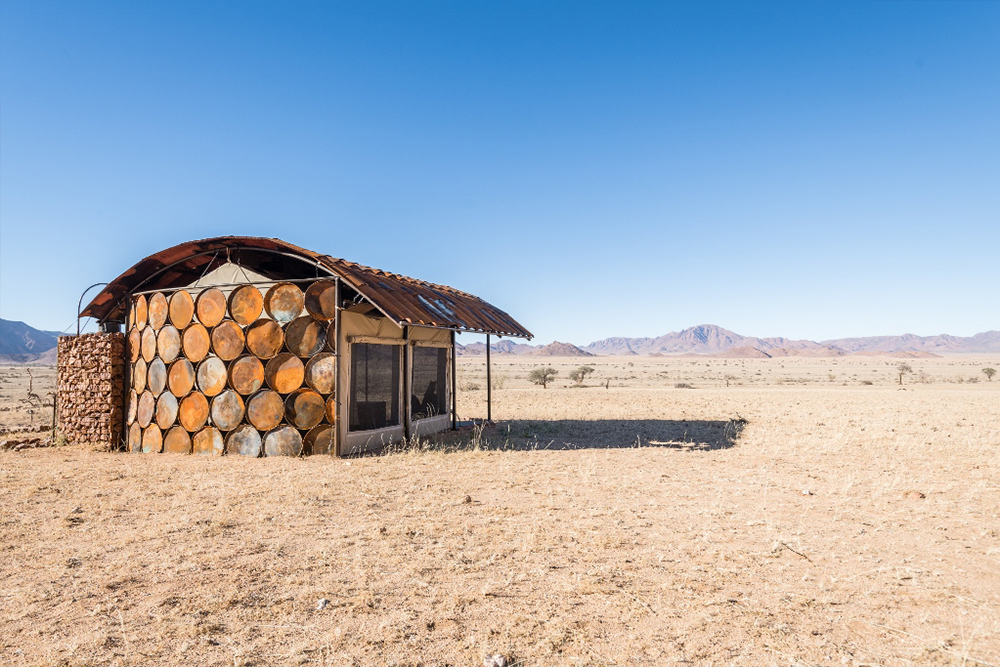 Whilst not a conventional entry into this category that is normally concerned with the opulence and luxury of modern day design, Camp Sossus embellishes every aspect of our declared intention to help redefine Namibian luxury. 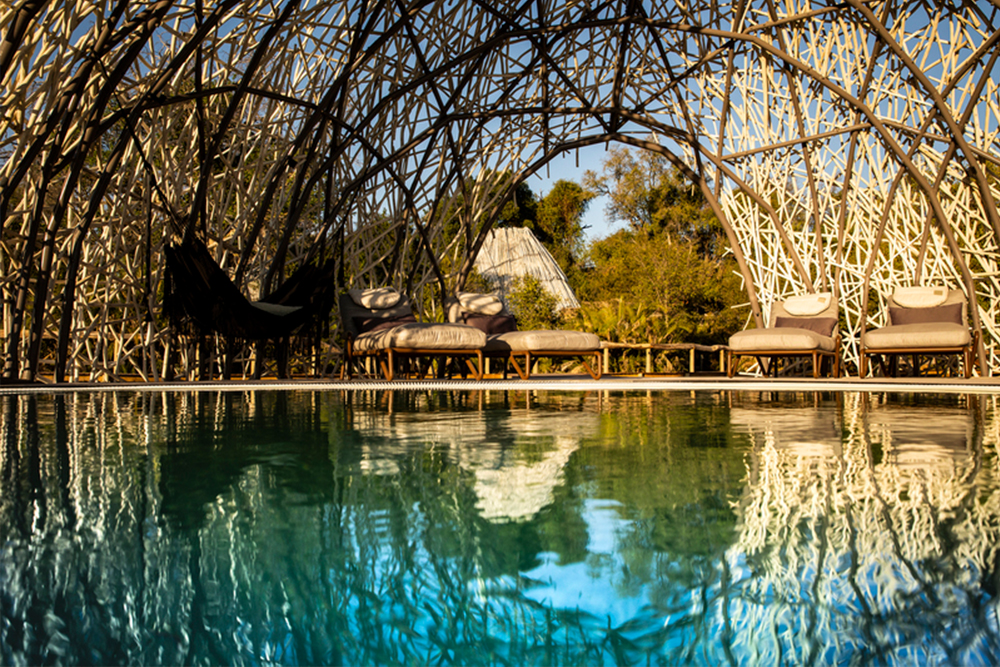 After undergoing a complete reinvention, Wilderness Safaris’ new Jao Camp reopened in the heart of Botswana’s Okavango Delta in June 2019.

An eight year project, including a three-year build, has resulted in one of Africa’s most extraordinary private villas. The Nest @ Sossus is an architectural and geometrical masterpiece which was the winner of the 2019 Wallpaper* Design Award for best private house in the world. Inspired by the Sociable Weaver nest and built almost entirely from thatch, roof to floor, The Nest was designed by Porky Hefer, one of Africa’s most awarded creative personalities, created by landscape conservationist Swen Bachran, and decorated by interior designer Maybe Corpaci.

Stylish modern minimalist furnishings compliment large spacious living areas including outdoor and indoor lounge and dining areas, an open-plan library, and an open-plan kitchen. Both contemporary and mid-20th century pieces coexist harmoniously, with most furniture being sourced in Africa from both established and up and coming African designers. Doktor & Misses, Mia Wildlake’s Studio 19, Douglas & Co, Bofred Cape Town, Jo Carlin, Diana Ceramics, Mungo Design, Hay & Tadition, Flos and Muuto are just some of the creators of pieces utilized in The Nest.

Outside areas boast installations by Angus Taylor and others, along with a discreet children’s playground, large pool and a variety of sitting areas set under ancient camelthorn trees. Outdoor furnishings include pieces from Italian based Moroso, designed by Marc Thorpe, Sebastian Herkner and Jonathan Levien. Local Namibian artisans also manufactured a number of custom pieces, made both locally and onsite, whilst some of the best quality Namibian granite was used for table tops and other features. 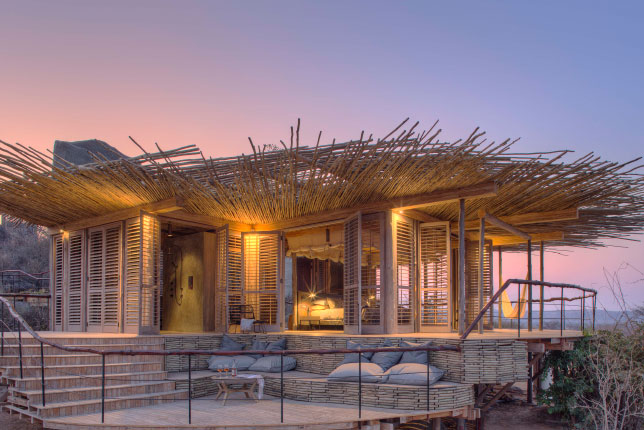 The objective of Jabali Ridge was to pay homage to the startling landscape of Ruaha National Park whilst bringing an unprecedented level of comfort and sophistication to Tanzania’s largest and least-known national park. Every element of the design was inspired by the natural environment to help guests connect with nature and disconnect from their busy lives. From the vertical elements which jut out of the rooms and represent the bulbous baobab trees the park is famous for, to the muted, hand dyed linens which mirror the colours of the granite boulders around which the lodge was built; Jabali is Asilia’s rough luxe interpretation of this vast wilderness. Handmade wooden headboards, dip-dyed mosquito nets and stone wash basins pay homage to Ruaha’s ancient and unique landscape. Jabali blurs the lines between inside and out and is designed to connect guests with the magnitude of their surroundings; retractable doors and louvred shutters allow guests the option to open their rooms entirely to the wild. Wherever possible the natural granite boulders which cocoon the lodge were used instead of formal walls, giving each room an organic shape. A key objective was that the lodge should be invisible to the human eye from a distance and blend seamlessly into the rocks, so as in no way to disturb the vista for safari goers exploring the park. Jabali was, as with all Asilia projects, built with the highest respect for the natural environment. 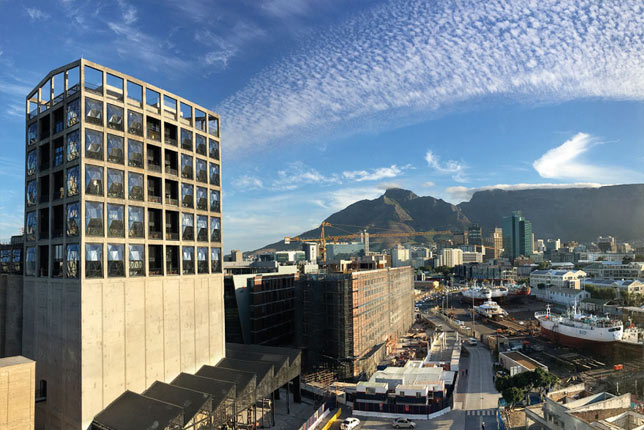 THE ROYAL PORTFOLIO – THE SILO HOTEL

We wanted to open a truly unique hotel that would become an icon of the Cape Town skyline and with the goal of becoming the best hotel in the world. Something different. Not just for Cape Town, but a destination hotel in its own right. A modern hotel that would complete The Royal Portfolio’s circuit of luxury South African travel experiences. The objective was to transform the historic grain silo building (originally built in 1921) into an architectural masterpiece. Heatherwick Studio was tasked with the transformation of the elevator house and the adjacent storage annex of six rows of seven silos into a luxury hotel above a contemporary art museum while carefully retaining its cultural and industrial significance. The design would incorporate two key architectural features – the grain shaped atrium carved out of the grain silos themselves and the pillowed glass windows that would adorn the façade of the hotel.

The Silo Hotel has been built in the grain elevator portion of the grain silo complex occupying six floors above what will become the Zeitz Museum of Contemporary Art Africa (MOCAA). The Silo Hotel is a magical space towering above the V&A Waterfront surrounded by the natural wonder of South Africa’s Mother City – the panoramic views of Cape Town are unsurpassed. Liz Biden’s exquisite interiors contrast the stark industrial nature of the building in their playful use of colour, fabrics and textures. The result is a building with historic, cultural, architectural and design significance. A pioneering development in luxury travel. 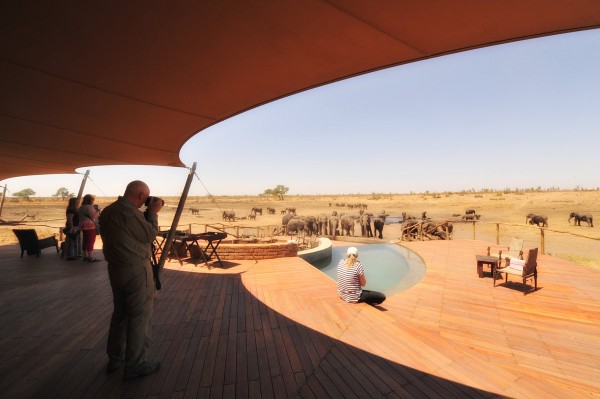 The Design of Somalisa Camp has included 180 degree open views of the floodplain in front of the camp, as well as larger open space to allow guests to feel at one with nature. In addiiton, our sewerage purity systems from Germany allow for 80% of the water used in our camp to be recycled back for wildlife drinking usage. We have also implemented a full solar farm for the camp which means we will no longer require the usage of diesel generated power and will be off the grid in terms of unnatural energy usage. Our Rebuild has included innovative ways in which to have a lighter carbon footprint and allow our guests to feel at one with nature. 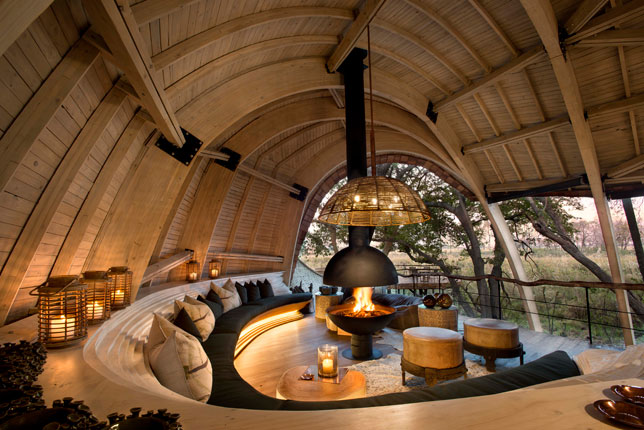 Extensively rebuilt and reopened in September 2014, andBeyond Sandibe Okavango Safari Lodge combines a modern design with an exceptional sense of place to redefine safari chic. The lodge’s structure is inspired by weaver birds’ nests and the pangolin’s body armour of scales, with the curvilinear shapes of the woven nests and the overlapping scales of the pangolin influencing its form and construction. The building’s skeleton is clad in a wooden skin of shingles and timber. Guests enter the lodge between segments of shingled skin, reaching a terrace above ground level. The boma is formed from huge logs of descending size that mimic the tailbones of the pangolin. The colour palette is copper and wood, highlighting regional handicrafts with huge baskets, woven carpets that mimic the pattern on the underneath of a water lily and an immense dining table made from the root of an ironwood tree. Guest suites are raised above the papyrus like nests and boast accent pieces like a crocodile-embossed leather sofa. The overall feeling is woody and ethereal, with bright copper highlights. In winter, the suites are warmed by a wood-burning fireplace. Sandibe has been designed with a focus on sustainability and the lodge’s combined solar electricity and solar hot water systems produce more than 200 000 Kwh of energy per year. 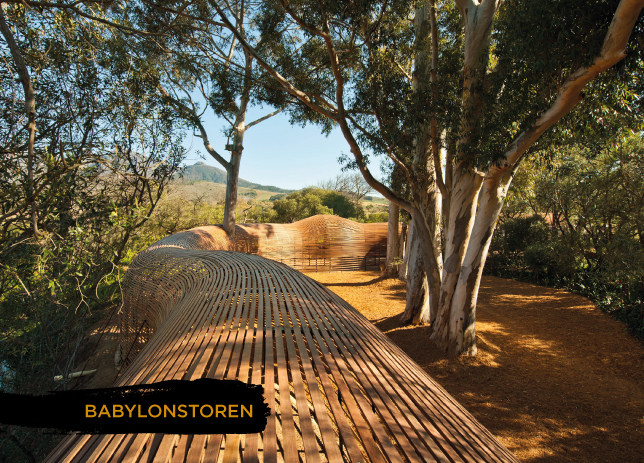