VIRTUAL REALITY - We Are Africa

“Gravity as a theory is false,” grinds the persistently exasperating FAQ on The Flat Earth Society’s official website. “Objects simply fall.” In sequential bouts of ignorance that evoke a child attempting invisibility by covering their eyes and squalling “if I can’t see you, you can’t see me,” the community rubbish most scientific discoveries of the last millennium and beyond, with comical assertions that satellites are actually ‘pseudolites’ put there to fool us, that the Earth’s mass continues infinitely and the like.

How such mistruths – and to a greater extent the world of conspiracy theories at large – perpetuate is chiefly the fault of what we’ve been taught; what we think we know; and who has afforded us those beliefs. The world’s strings might not be being pulled by shape-shifting, extra-dimensional lizard people, and the Large Hadron Collider may not have been conceived to open a portal to hell, but we are constantly bombarded by half-truths, falsehoods and disinformation. The age of post-truth politics might have sensationalised the propaganda of ‘fake news’, but it is the latent deception beneath the veil of trusted sources that poses most threat. Although positively spherical, the world is certainly not what you think it is. 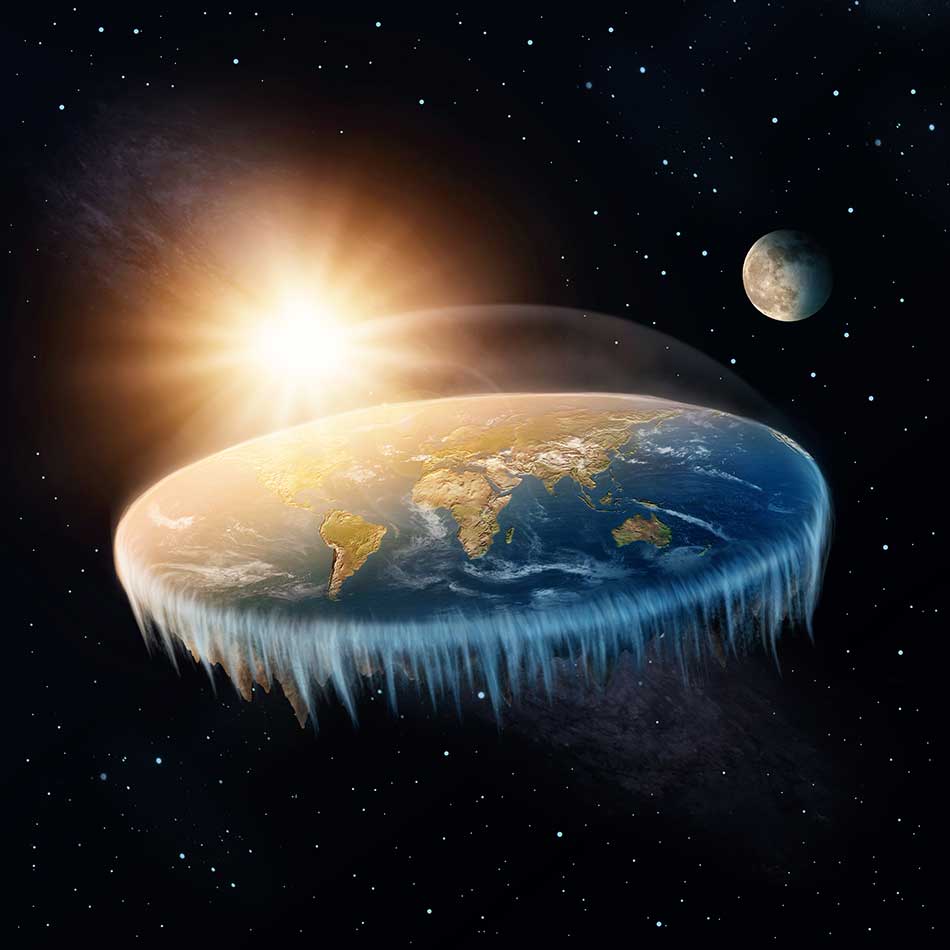 When Eratosthenes upset the Flat Earth community as early as 240 BC, his calculations of our planet’s circumference would set forth a revolution in the world of cartography, fellow Greek geographer, Strabo, conceiving his Globe of Crates – thought to be the world’s first – some 90 years later. Mapping the world on the sphere that Greek greats had confirmed meant that our place on Earth could be represented clearly for what it is. Martin Behaim’s 1492 Erdapfel is the oldest surviving terrestrial globe – a creation from a time where maps were being defined, Columbus returning from the Americas a few short months later.

In a rapidly changing Eurocentric world, the way we look at our planet was defined 77 years on when German-Flemish geographer, Gerardus Mercator, devised a cylindrical map projection that allowed these globes to be represented on one flat map. The Mercator projection is the world as you typically see it today: the representation maintained by Google Maps; the representation you looked up to on your classroom wall. The thing is, like much we believe to be true – or ‘accurate’ – Mercator’s view of Earth is in fact wildly distorted. Try puncturing an inflatable ball and placing it flatly upon a wall… Mercator’s projection, whilst invaluable to the explorers of its day, achieves its perceived accuracy with some trade-offs – most notably, its compromising of developing continents and countries.

Its origins in a time where Europe’s domination and exploitation of the developing world was hitting full stride, Mercator’s is an interpretation of the world that suited the politics of its time – perhaps of all time. That every map begins with the same mistruth Flat Earthers are so fond of is mapping’s inherent problem – however your trade-offs work out, somewhere must suffer – such is the physical impossibility of flattening a globe; but Mercator’s distortions held benefits for the nations of power. The cartographer’s trade-off means countries and continents appear smaller as they approach the equator. Sitting atop the pile, in the centre of it all, the all-conquering Great Britain joins its Western European companions in flattering to deceive. Should it be shown on the line that separates hemispheres, its insignificant scale would be all too apparent. Straddling the equator, it is Africa who suffers most, the colossal continent reduced to a whisper in relation to Russia, or even to Greenland, which, in truth, is no bigger than the Democratic Republic of Congo.

Born in Berlin on 22 May 1916, Arno Peters – whose father found himself incarcerated by the Nazi regime toward the end of World War II – knew a thing or two about divisive times, and would develop a fixation with political propaganda. Spending much of his academic life studying synchronoptic world history (a way in which to portray all histories in all areas of the world equally), the historian committed his life to fair representation. “The size is the first sign of the importance of a country,” he attested. “Mercator’s is a map of the epoch of Eurocentrism, colonialism and imperialism.” Although he would distort the ‘true’ shape of the world’s landmasses, the German historian’s map – ­launched at a 1973 press conference in Bonn – represents true scale, and with that demands a reappraisal of our own understanding.

That millions, perhaps billions, of us could grow up with a distorted impression of the planet’s true geography speaks volumes of the sort of political propaganda Peters grew fascinated by. We live in an age where the President of the United States of America can refer to African nations as “shithole” countries; where George W. Bush, Joe Biden and Bill Clinton can each confuse a continent for a single nation; where Boris Johnson can talk of “flag-waving piccaninnies” and “watermelon smiles”; and where Time Magazine can write about alcoholism in Kenya and title their piece Africa’s Drinking Problem. During the Scramble for Africa (between 1881 and 1914), colonial nations laid claim to their territories via a violent process of invasion, occupation, colonisation and annexation. In continuing to minimise the perceived physical presence of Africa, in flippantly applying colonial language and values, it can feel as though precious little has changed.

That is, if Africa and its diaspora wasn’t rewriting its own history and forging a new path built on empowerment and a singular identity.

“The trouble with the people on this planet,” wrote the avant-garde ‘cosmic’ jazz composer Sun Ra, “is they refuse to think, they refuse to believe, anything except what they know.” That we want to think we are open-minded, but – contrary to our desires – remain easily scripted, is how so many of us can got so far in life marvelling at the size of Greenland. It is how those billing themselves as ‘free-thinkers’ who can get carried away by fanciful theories, while more sinister conspiracies can carry on in plain view.

The American musician born Herman Poole Blount, who rose to prominence in Chicago’s jazz scene of the 1940s, abandoned his birth name in favour of one inspired by Ra, the Egyptian God of the Sun. It is part of an elaborate persona that the prolific composer, poet and philosopher would weave for himself – a dense backstory rooted in cosmology and mysticism, where he would proclaim himself an extra-terrestrial from Saturn, sent on a mission to preach peace. A mainstay of underground music scenes right up until his death in the early 1990s, Sun Ra touched many with his complex and eclectic approach to music and performance – not least those spellbound by the cosmic charm of Afrofuturism, the cultural concept first coined by author Mark Dery in his 1993 essay, Black to the Future.

Dery’s landmark discourse – a series of interviews with three prominent thinkers in African-American literature: Samuel R. Delany, Greg Tate and Tricia Rose – began with a conundrum: why do so few African Americans write science fiction? A genre that, as Dery posited, would seem a natural fit, given its dealings with strangers in strange lands. Writing of what he saw as the paradox behind this lack of eminent African-American sci-fi writers, the cultural critic asked: “Can a community whose past has been deliberately rubbed out, and whose energies have subsequently been consumed by the search for legible traces in history, imagine possible futures?”

Sun Ra could. And his inspiration could be felt through the waves of black counterculture that followed him. Visual artists, from graffiti writers to Jean-Michel Basquiat, imagined their black figures in abstract landscapes. And from Kraftwerk’s influence on early electro to Public Enemy’s Fear of a Black Planet (even the post-apocalyptic video for 2Pac’s California Love), hip hop would forge a long-term love affair with fantasy and sci-fi subcultures. “I generally define Afrofuturism as a way of imagining possible futures through a black cultural lens,” says art curator and Afrofuturist Ingrid LaFleur. The tail end of the twentieth century saw that black cultural lens explode, and its fire burns brighter by the day.

Whilst Afrofuturism itself may have remained a niche philosophy, under the surface its protagonists have multiplied over those years. As well as a series of high-profile exhibitions and cultural events – such as MOONDANCE at New York’s prestigious MoMA PS1 gallery – a succession of crossover musicians have taken the scene to the brink of mainstream – from Erykah Badu to Flying Lotus; OutKast to Janelle Monáe. This year, though, saw the moment that Afrofuturism finally broke through, the Marvel superhero film Black Panther introducing the world at large to a cultural concept that is empowerment incarnate.

There’s little left to be said about Ryan Coogler’s film that hasn’t already been said; suffice to say that its arrival at a time of “shitholes” and “piccaninnies” couldn’t have been more fitting. It is, however, its cultural legacy that is of most importance: a new generation who can imagine possible futures through a black cultural lens.

“You’re looking at stories about inventors and creations, and you don’t see people who look like you,” says Ytasha Womack, a prominent writer in the Afrofuturism world. “You look at films about the future and they don’t have people like you, then you begin to get the impression that maybe I can’t be a part of the future.” It’s not hyperbolic to suggest that black history is more horrific than any science fiction writer could imagine. Pasts erased, Afrofuturism gives a people the opportunity to create a world that puts them in the starring role – Black Panther’s time in the spotlight guaranteeing them their place in the future.

With a dogged determination to encourage people to change how they see the world, Arno Peters was an advocate of equality, a truth-seeker who forced discussion in the name of fostering a more just world. It’s certain he would’ve loved this movie’s portrayal of Wakanda – the fictional African kingdom presided over by its lead hero – as a self-sufficient utopia that resisted colonisation, it presenting a dramatic manifestation of the sort of global reappraisal he provoked with his most famous work. Wakanda offers a stylised rebuttal to Mercator’s distortions, to the territories drawn up during the Scramble for Africa; it is Africa empowered, remapping its own boundaries.

Peters’ quest for equality, and the Afrofuturists’ avant-garde perspective on empowerment, can teach us valuable lessons in how we approach this continent and others; how we avoid stereotypes; and how – inspired by Sun Ra – we might truly begin to believe in things we don’t know. As travellers seek new frontiers, perhaps those frontiers exist in our mind – a reassessment of familiar lands as potent an experience as discovering a real-life Wakanda.

Mercator’s visual mistruth is a poignant rendering of a prolonged cycle of injustices done to Africa and its people, but it shouldn’t cloud the truth that inequality exists everywhere. Applying Arno Peters’ alternative perspective or the rebellious imagination of Afrofuturism to any circumstance can improve it. Ignore these symbols of empowerment, and you might as well believe that “gravity as a theory is false.”

Got it
demo slot gates of oylmpus