CONSERVATION WILDFIRE - We Are Africa

A KINGDOM RISES FROM THE ASHES

Conservation is usually seen as saving the big five, protecting natural habitats from urbanisation and pollution but seldom are flowers the focus. Michael Lutzeyer’s Grootbos Private Nature Reserve is largely involved in conservation, one of the notable aspects being the protection of the Cape Floral Kingdom and protection of the indigenous flora.

We asked Michael about his mission and the importance of preserving South Africa’s indigenous flora?

There are 6 kingdoms in the world, the Tundra, the Amazon, the Equator, Australia, Patagonia and New Zealand then the 6th kingdom is the Cape Floral Kingdom. It is the smallest of all botanical kingdoms and only 0.03 of the earth’s mass, but in its diversity it is the most diverse flora kingdom of them all.

The fynbos is the generic name for all of the plants in this area, as such the Cape Floral Kingdom is also the fynbos, there is no difference.

Within this, there are two kinds of fynbos, the mountainous one and that of lowlands. Development is a threat, people want to live by the coast, therefore they dig up the indigenous flora to start putting down lawns and building homes. The second threat is farming; the soil of the region lends itself to viniculture and is also good to cultivate apples and pears. The third big threat we have are alien species, plants that have been brought into the country that thrive within our fynbos and many of these come from Australia. One of the reasons for this is that when people were oblivious to the threats, alien species were brought in and now we can’t remove them.

In South Africa, along the coastline there are dunes and people used to be afraid that these would move, we now know that they are regulated by the winds. However, alien species were brought in which grew in sand, the birds then took the seeds from these plants and dropped them in the fynbos and the new plants flourished as they had no natural enemies and grew quicker smothering the fynbos.

You have been recognised for your work in conserving plant life, can you tell us a about why this is important and how it all started?

The fynbos is the ecosystem and without it we wouldn’t have the ants, the mice or the birds. They all play an important part in the regeneration of the fynbos, carrying the seeds across the land and into the ground. When we decided to launch the Grootbos conservation project in 1997, we needed to do a complete survey of our property. We found the best and most varied areas on our property and only then could we manage the reserve. We took our land and divided it up into quadrants and determined the different aspects of the areas and split the land into 49 sites, we put a stake into the ground in all of them and put them on GIS (global information satellite) to know where they are, those stakes will stay there for the next 100 years so we can evaluate the kind of species coming up after a fire.

We planted these stakes in 1997 and we found 323 species, one new specie we never knew existed and 11 species on the red data list meaning endangered plants. This land could have been ideal to create golf courses, vineyards and exploit as a holiday property, but we didn’t want to loose that one specie and the 11 on the red data list. Now in 2014, we have discovered 768 species, 6 new for science and 120 red data species that weren’t in our first findings. We now know, we would have lost so much more if we had used that land for development.

The protected fynbos land was ravaged by fire in 2006, this is one of the key threats it seems. However fire is also meant to be essential to its growth, could you explain for us this complex relationship to fire?

The 4th biggest threat to the fynbos is uncontrolled fires. In areas of rearing cattle for example, people burn fynbos to rid themselves of it, but the plants have not reached sexual maturity so their seeds are burnt before they are fully grown. Also areas that are often visited by people can be a threat, BBQ’s and cigarettes are often the cause for wild fires. The fynbos have flammable oils within them so they fires are easily ignited. Fynbos has to burn, it needs fire every 12 to 20 years to release the seeds that are buried deep within the soil. However, if it burns before these have reached sexual maturity they will not flower again and instead species will be destroyed.

The fire of 2006 started about 20 miles away from the house; it burnt approximately 150,000 acres of land. It was a colossal fire, the land looked like a moonscape. People came and were shocked. I was not worried, I knew that an explosion was about to happen and within three days of the fire the first plants started to appear. We found these beautiful gladiolus by the thousands and couldn’t find them in any records. We dug a little deeper and discovered that they were called Gladiolus Overbergensis and the last known sighting of these flowers was in 1950. That’s how delicate the nature is and how important fires are. This little seed was underground for the last 20, 40 years waiting for a fire to happen. The heat of the fire and the ash coming through the ground reignited these seeds for them to grow. We found 63 news species, a lot of these fynbos only grow during one year after a fire.

In what way do you harness ecotourism and how successful has it been in the past?

In principle, to harness ecotourism one has to describe what one understands about ecotourism, one should call it a combination of social responsibility and conservation. I believe it is the responsibility of any lodge or hotel to look after nature and look after people. If we don’t do this we won’t have anything worth attracting tourists in 20 years time. We work with our neighbours to develop what we call a conservancy like-mindedness of all of us together to protect the fynbos and today we have 14,000 hectares under conservation. Tour operators are now saying how fantastic this area and true wilderness is. Nature’s appeal, in this case, attracts tourists, which creates jobs and security for the local community. In the end it really does benefit us all. 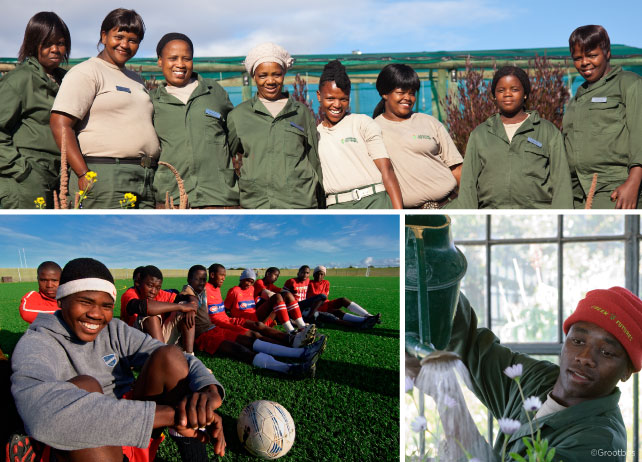 Your youth development programme uses sport to promote education, health and social integration. Could you please describe for us the projects you have launched and carried out to work with the community whilst protecting the fynbos?

We have a project that it called Green Futures, where we take local people that are unemployed who are older then 18 and no older then 35 and we teach them indigenous gardening and all about the fynbos. So that if you brought a house here you could employ someone that knows how the eco system works.

We work closely with the Eden Project in Cornwall; we were instrumental in setting up the fynbos over there and as part of our collaboration we send 3 students over to them each year. This is a great example of how the passion for eco tourism and conservation can bridge the gap between nations so geographically remote. There is huge community around the world and the environment is slowly becoming a sector of professional opportunity for the learned people locally as well. We also have another project where we manage classrooms of about 20 kids, teach them every Friday for 9 weeks about the environment. Educating these children from the townships to know that they cannot throw away plastic, that if the plastic they throw away ends up in the ocean and a turtle eats that plastic the turtle will die, is primordial. We bring speakers in for them and we take them on a study to make sure they understand the importance of fynbos for their future.

How do you fund these projects?

We fund our projects through, Grootbos and then we have numerous generous donors. We have a great sports initiative, we teach 300 kids about sport, but also about HIV, cleanliness and camaraderie. This is sponsored by the English Premiership League who donate £50,000 a year. We also get support from Barclays bank, The Eden Project, The British High Commission and the town of Hamburg as well as our guests who often leave donations from anything to $1000.

Is Fynbos slowly fading away or do you believe it has a future?

I think that people are becoming more and more aware of the fragility and importance of fynbos, which they are. Conservation efforts are made, private landowners are getting involved, the government are putting ideas into place to stop development and vineyards. I think the issue is gaining momentum and I am very positive about the future of the fynbos.

Find out more about Grootbos here.