FADE IN-FADE OUT - We Are Africa

Could you please talk us through the measures that the Shamwari Wildlife Department are taking to conserve Africa?

First and foremost we are passionate about conserving a vanishing way of life and have, and continue to, rehabilitate the land by nurturing it back to its original condition. There are so many unique biomes in South Africa and we strive to maintain them for future generations to enjoy. Wildlife naturally is of utter importance to us and without the Big 5, for example, tourism would suffer immensely.

Approximately half of Sanbona Wildlife Reserve, which has about 600 species, used to be livestock and agricultural farms and all aspects of farming are systematically being removed. There are various floral kingdoms that make up the Reserve. These include Acacia Thickets, Nama, Karoo, Renosterveld, Succulent Karoo and Central Mountain Fynbos. Succulents are especially varied and fascinating with names like Baby’s Bottoms, Ostrich Toes and Pig’s Ears.

Animals that roamed the area freely living amongst the San but were eradicated have been reintroduced. The Big 5 – Lion, Leopard, Buffalo, Elephant and Rhinoceros as well as various other species such as Gemsbok, Springbok, Hartebeest, Eland, Kudu, Black Wildebeest and Zebra are seen on Sanbona Wildlife Reserve. Natural small game such as Jackal, Caracal, Aardwolf, Ant bear, Brown Hyena, Grey Rhebuck, Steenbuck, Klipspringer, Grysbok and Common Duiker continue to thrive. 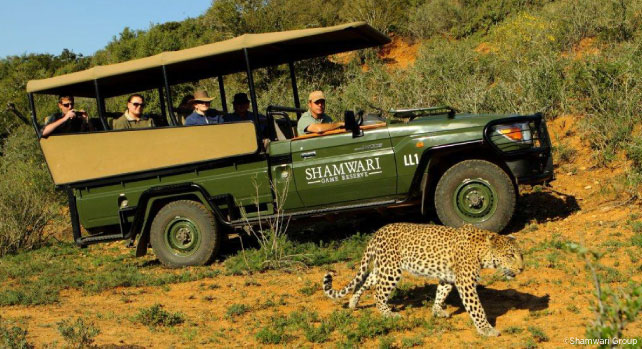 Along with the Wilderness Foundation you have raised over 7m Rand to help protect the Rhino, how did this come about and how is the campaign evolving?

We have had a great relationship with the Wilderness Foundation for many years and the Forever Wild Campaign has been hugely successful. The programme was developed in 2011 as a response to the rhino poaching crisis and is active through the Rhino Protection Initiative.

To create further awareness and help to raise funds Shamwari Group then created a special package where guests had a choice to book ‘the safari that makes a difference’ and when booking and donating a minimal amount, Shamwari Group would then add to this.

The campaign continues to prove beneficial and as mentioned has raised over R7 million to date. We will continue to run this campaign in 2015 and beyond.

What is your greatest concern for African wildlife?

That once a species has gone, it has gone and there is no way of bringing it back. The ripple effects of a species becoming extinct are huge.

As well as protecting the animals native to Shamwari Game Reserve, you also work to conserve flora. Could you tell us more about the initiatives you have in place for the protection of Shamwari’s Ecology?

We have an entire team that constantly monitors the flora, eco-system and unique biomes at each game reserve and ensure that the land is able to support the particular wildlife and numbers of each of them. Initially large areas of land were no go areas in order to ensure their survival. It’s a very delicate process and fortunately the areas that have been protected are thriving.

Who do you look to for conservation inspiration?

Mother Nature, as she is the one that is always right. She will let you know if something is out of balance. Our very own Dr Johan Joubert – Group Wildlife Director, is a leading authority on wildlife conservation and his pioneering work along with his team continue to make huge strides in conservation.

How you would like to see the future of African travel take shape?

By having greater accessibility to Africa via the airlines and also we believe at Shamwari Group that you really have to offer an educational experience especially to the next generation of travellers hence why our Kids on Safari programme works well. Africa is a place that you don’t just go on holiday to, it’s a place where international guests in particular have the opportunities to learn about wildlife and conservation issues as just two of the many unique elements Africa offers.