It’s half time in the fight for conservation. So far, the game hasn’t gone our way – even as we speak, entire species are in danger of being lost altogether and the opposition comes at us from all sides.

But it’s not too late to turn things around. It became clear from the half-day Conservation Lab, originally featured as part of the official We Are Africa programme, that we’ve already got the players and the skills. We just need to regroup, find some self belief and work together to win Africa’s conservation challenges.

Enter the newly reimagined Conservation Lab: a progressive two-day un-conference event of its own, created to bring together 50 influencers in the travel industry with 50 luminaries from the conservation world under optimal conditions for creative thinking and collaborative innovation.

So far, the squad is shaping up nicely. If you want to make the team, apply now or contact ryan@beyondluxury.com for more information. In the meantime, meet some of our star players… 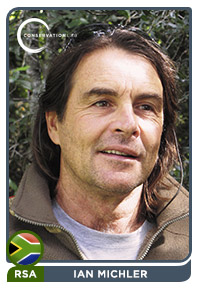 Conservation hero:
Anyone that questions the current interpretation of ‘sustainable use’.

Current conservation project/s:
Blood Lions: As the Consultant, Researcher and Lead Character in the feature documentary that has been seen in over 175 countries and territories (www.bloodlions.org) – and as a leader of the global Blood Lions campaign that aims to bring an end to all exploitative predator breeding practices as well as canned hunting (www.facebook.com/BloodLionsOfficial).

The Plan: A strategy that seeks to unite all stakeholders involved in the rhino poaching crisis – The Plan offers a multi-faceted approach that covers all aspects other than trade. (www.accountabilitynow.org.za/the-integrated-rhino-poaching-strategy-the-plan).

Tracks of Giants: The initial phase was a 5,164 km expedition walking, cycling and kayaking across six African countries, aimed at bringing widespread awareness to various conservation issues, as well as documenting the work of conservation, research, ecotourism and community ‘giants’. The current phase is based on educational work and the production of a book and television documentary (www.tracksofgiants.org).

Eden to Addo: As a Director of a South African-based corridor initiative that seeks to link three mega-reserves – the Garden Route National Park, Baviaanskloof Mega Reserve and Addo Elephant National Park – by means of natural corridors, to restore and protect the regions’ immense biodiversity (www.edentoaddo.co.za).

Greatest conservation achievement:
Our work is ongoing and it will be for others to decide who has achieved, or not.

How can we play to win the conservation game?
The conservation game is not complex. The urgent need to change our attitude towards the environment has nothing to do with one’s wealth, race, religion or nationality. Instead, it has everything to do with common sense, as it boils down to ensuring our own and our family’s survival. Among other things, every single one of us requires fresh air, clean water, fertile topsoils, functioning forests and oceans, biodiversity and an intact ozone layer to survive. Be logical – there is no other option but to change the way we think and behave before we reach a global ‘tipping point’. 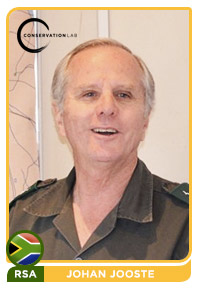 Greatest conservation achievement:
The formulation, communication and implementation of an environmental asset management strategy and plan for the Kruger National Park and SANParks.

How can we play to win the conservation game?
Be prepared for a marathon with no easy wins – there are no medals hanging on the trees. On the tactical level, be persistent and unpredictable. On the strategic level, think big, start small and act now. A satellite view will not work: too remote. Neither will a squirrel view suffice: too short sighted. Take a chopper view and adapt speed and height according to the circumstances to ensure leadership that counts. Take few things seriously and nothing personal; law enforcement in conservation is a rather thankless task with many “experts” who knows better. 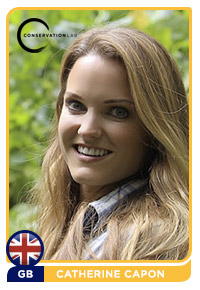 Current conservation project/s:
I’m currently making films, writing articles and creating imagery to encourage people to choose ecotourism and wildlife-watching holidays in their time off work. I believe that ecotourism is a powerful conservation tool, as it makes endangered animals worth more alive than dead. At its best, ecotourism provides employment for local people and puts a real value on areas of outstanding natural beauty.

Greatest conservation achievement:
Inspiring individuals, couples and families to immerse themselves in nature in their time off work. I believe that spending time with wild animals reminds us that we too are just animals. That commonality is what binds us. There is no conservation tool more powerful than a person who has bathed in this feeling.

How can we play to win the conservation game?
Spend time with wild animals. Observe them. Learn about them. See their beauty. Understand how our lives are intertwined. Love them and protect them. 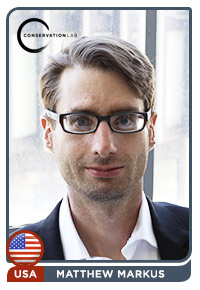 Current conservation project/s:
At present, I’m passionate about the emerging post-animal bioeconomy. That’s why I’ve co-founded Pembient, a company seeking to stop the poaching of, and prevent the farming of, iconic species. Our first product is rhino horn, which is prized as a carving material. We use synthetic biology and 3D printing to biofabricate it at a fraction of its illicit-market price. By doing this, we’re essentially establishing what Nobel Prize-winning economist Dr. George Akerlof called a “market for lemons.” Simply put, if biofabricated horns can be passed off as wild horns, then consumers won’t be able to reliably determine any horn’s real value and the price of rhino horn will fall. This, in turn, will reduce the incentive for poachers, middlemen, and corrupt officials to harm rhinos.

Greatest conservation achievement:
My greatest conservation achievement is my work on the Black Rhino Genome Project. This project involves my company, Pembient, the University of Washington, New Harvest, and DNAnexus. Together, we’ve crowdfunded over $17,000 to help scientists map out a black rhino’s entire genetic code. Ultimately, the goal is to build a database containing data on all eight subspecies of black rhino, three of which are extinct, in order to better understand the differences within and between subspecies. One day, the data may even assist in bringing the extinct subspecies back to life. All of the project’s data will be publicly available so that conservationists, biologists, and citizen scientists can use it in their own research.

How can we play to win the conservation game?
Fighting our way back to a past conception of nature is impossible. What we can do is move “forward to nature.” We can do this through technology; however, it is up to us to decide what kind of nature would be best. We can make one that is a theme park guarded by cameras, drones, and GPS-enabled sensors. Or, we can harness the technology of nature itself to biofabricate one that includes an abundance of ivory, horn, and other luxuries. Only the latter satisfies our innate desire to touch nature, but does so without despoiling it.

If you want to be part of the Conservation Lab 2016, apply now or contact ryan@beyondluxury.com for more information.