ON THE HUNT FOR THE ‘REAL’ AFRICA - We Are Africa

ON THE HUNT FOR THE ‘REAL’ AFRICA

In response to the modern traveller’s desire for true immersion in a destination, African safaris are stepping up their game. Melissa Twigg looks at a few of the experiences going beyond mere observation to allow participants intimate access to the most extraordinary wildlife and terrain on the planet.

For many of us, a trip to rural Africa is a chance to step away from our overly prescriptive city lives and relinquish control over what we experience for a few precious days. Because there is no telling how a morning in the bush is going to unfold. One day, you might see a lioness gently playing with her cubs; the next, a pack of wild dog chasing a single buffalo; the next, a skulking hyena following the scent of fresh meat. Alternatively, you may simply pass a few futile hours driving through seemingly deserted bushland, with little more than a herd of impala to talk about.

It is this complete reliance on the whims of animals that feels so unique – that, and the fact that no two days can ever be the same. But while not even the most experienced of game rangers can curate a drive tailored to your desires, some might argue that the traditional lodge experience has grown somewhat formulaic.

The routine is one that that any of us acquainted with African holidays can recite off by heart: coffee before dawn; a morning game drive; brunch on the deck; relaxation; afternoon tea; the evening game drive; drinks in the boma; and then dinner. And while it is impossible to criticise a daily rhythm that has ignited a love of Africa in hundreds-of-thousands of guests over the last fifty years, a variety of experiences can only lead to a more profound understanding of the continent and its inhabitants. 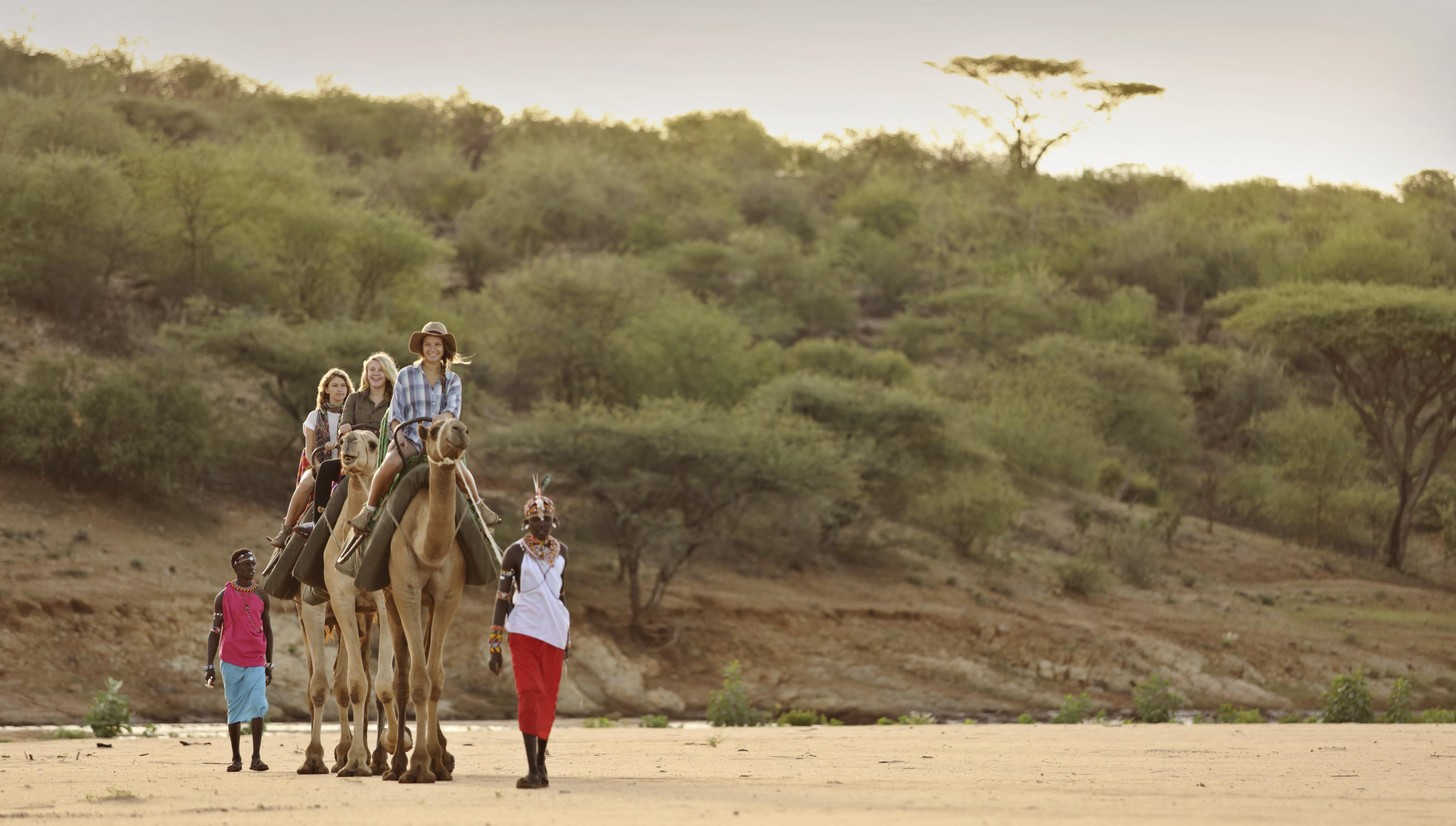 Our relationship with the animals of Africa is constantly shifting, and what we now think of as a traditional safari would have seemed more than a little unusual 60 years ago. Until the 1970s, foreigners predominantly travelled to the heart of the continent to hunt. And they expected to do this with minimal levels of comfort. However, as visitors began to appreciate the extraordinary wildlife of Africa – and finally see it as more than just a bull’s-eye target – the experience of killing, happily, transformed into one of observing.

An entire industry has grown up alongside this desire, catering to visitors from far-flung destinations and providing them with every material comfort in the savannahs, scrublands, deltas and hills of Africa. However, as our attitudes to travel have shifted over the last few years, so has the safari experience. In an age of 40-storey skyscrapers, six-terminal airports and eight-lane motorways, increasingly our greatest luxury is space and solitude – and alongside that, many of us are now searching for an immersive travel experience that is not only memorable, but that provides us with an intimate understanding of the country we’re visiting.

Game drives – still an essential part of the safari experience, allowing guests to see an extraordinary range of animals in a safe setting – are not necessarily the best way to interact intimately with the animal, bird and plant life we have travelled across the world to see. If you have ever been to a national park packed with tourists and sat in one of six vehicles parked in a semi-circle around a confused leopard, then you will have longed for the chance to see Africa in a more ‘real’ way.

In response to this shift in values, enterprising travel companies have begun to offer guests the chance to walk, climb, hike and camp their way through the African safari experience, slowing down to match the pace of life in the bush. One popular option is Robin Pope Safaris, which offers a week-long walking tour of South Luangwa National Park in Zambia, with up to eight hours a day on foot for a maximum of six guests. This gives you on-the-ground experience of an extraordinarily beautiful terrain that’s home to lion, elephant, leopard, buffalo and zebra. Nights are spent in mobile bush camps, where beautifully furnished, absurdly comfortable tents are erected each evening for guests to collapse into. 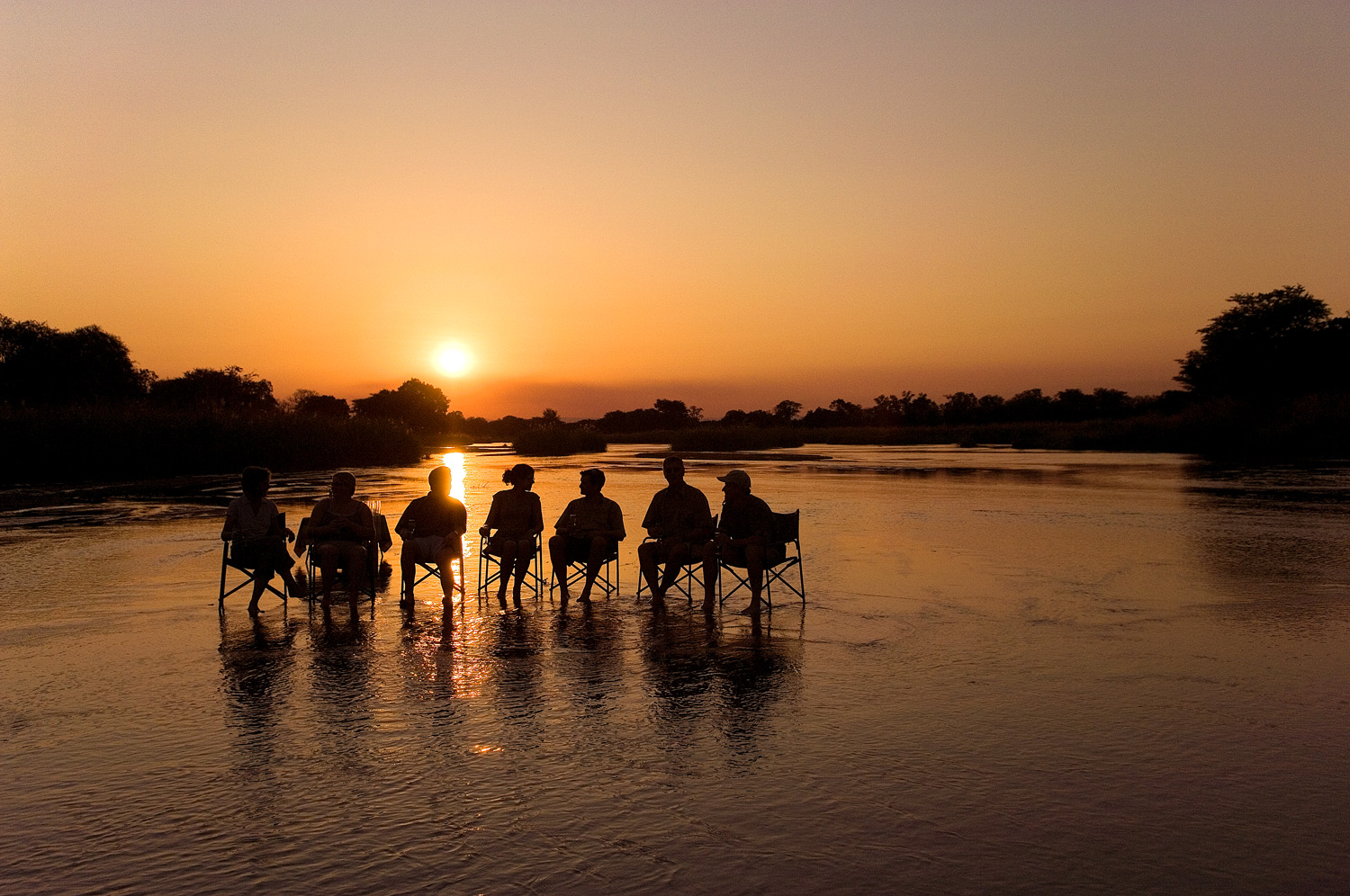 For a different type of wildlife, there is Odzala Discovery Camp in the Congo, where visitors follow local trackers on foot deep into the rainforest to search for lowland gorillas and chimpanzees. The sights and sounds of the Marantaceae forest will shape your days as you hike through it each morning and afternoon – and the incredible array of life along these ancient forest trails is worth the journey to the Congo alone.

For a river-based experience, Sasaab Lodge in the Northern Frontier District in Kenya tailors its walks to your fitness and energy levels and offers the option for guests to sleep in mobile tented camps on the banks of the Ewaso Nyiro River, dozing off to the sounds of hippo gruffly snorting throughout the night. You can spend your days rowing down the river or walking alongside it, stopping to watch animals frolicking, drinking and cooling off in the water.

Immersive sleeping experiences are also becoming increasingly popular. Old Africa hand Colin Bell will, this June, launch the much-anticipated Sable Alley in Botswana – and one of the many options open to his guests are Skybeds: comfortable double beds set high above the trees, far away from the rest of the camp. “There is nothing quite like falling asleep to the sounds of the bush, with the light of the stars above you”, he says. “It is incredible – the best way to feel like you are truly in the heart of the Africa, a million miles away from civilisation. And we really have thought of everything – including a little bathroom just under the bed, so you don’t have to risk your life if you need the loo in the night.”

And if you’ve slept outdoors in a Botswanan game park, why not further test your bravery and try spending the night on a volcano? Virunga National Park is home to Mount Nyiragongo, a stratovolcano that features the world’s largest lava lake at its summit, while the forested lower slopes are home to a variety of animals including chimpanzees, monkeys and bushbuck. 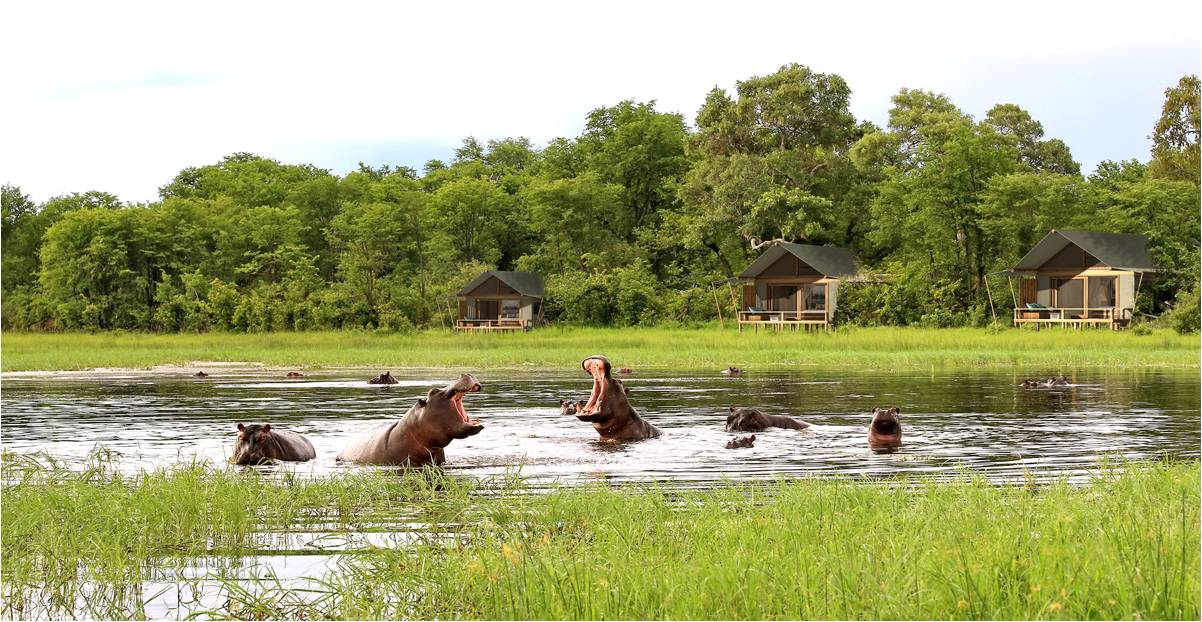 From the rim of the volcano, visitors can peer down into a churning lava lake and see and hear hot gases exploding up though a mosaic of molten lava. Treks to the summit take around an hour from Mikeno Lodge in Rumangabo, but the majority of guests choose to sleep on the rim so they can watch the awe-inducing contrast of the hot orange lava bubbling against the black of the night sky.

High altitudes often lead to an entirely unique safari experience, and nowhere is that clearer than at Simien Lodge in Ethiopia. The highest hotel in Africa at 3260 metres (with the highest bar on the continent), it boasts views across the surrounding UNESCO World Heritage Site and offers daily treks into the Simien Mountains to look for birds, gelada and even wolves, hyena and leopard.

Walking through rural Africa is an experience that will stay with you for decades to come. After years of navigating the bush from the safety of a 4,000-pound jeep, I went on my first walking safari two years ago in the Kruger National Park in South Africa. During the five-day adventure, I realised for the first time how transformative it was for my relationship with the animals. In a vehicle, you are a passive observer of wildlife; but on the ground, you are highly attuned to the slightest noise from the smallest impala, let alone the bone-chilling sound of a nearby hyena cackle.

Allowing those natural animal instincts – instincts we so often forget we possess – to kick in is an exhilarating experience in itself. In a jeep, very little other than an irate elephant can harm you, so your body often forgets where it is. But on the ground, the smallest sound will make you turn around, and you find yourself reflexively looking down for signs of a paw print or the long lines of a snake in the sand.

The rush of adrenalin you get from seeing any of the Big Five at eye level is extraordinary, but even bird life is magnified – I found their colours and sounds far more memorable as they fluttered in the air around me than I ever had from a jeep. And as your mental checklist of animal viewings fades into the distance, the surrounding bushland suddenly becomes more real and more beautiful. The part of the Kruger Park I was in suddenly looked greener, rockier and more undulating than it does from a car window. 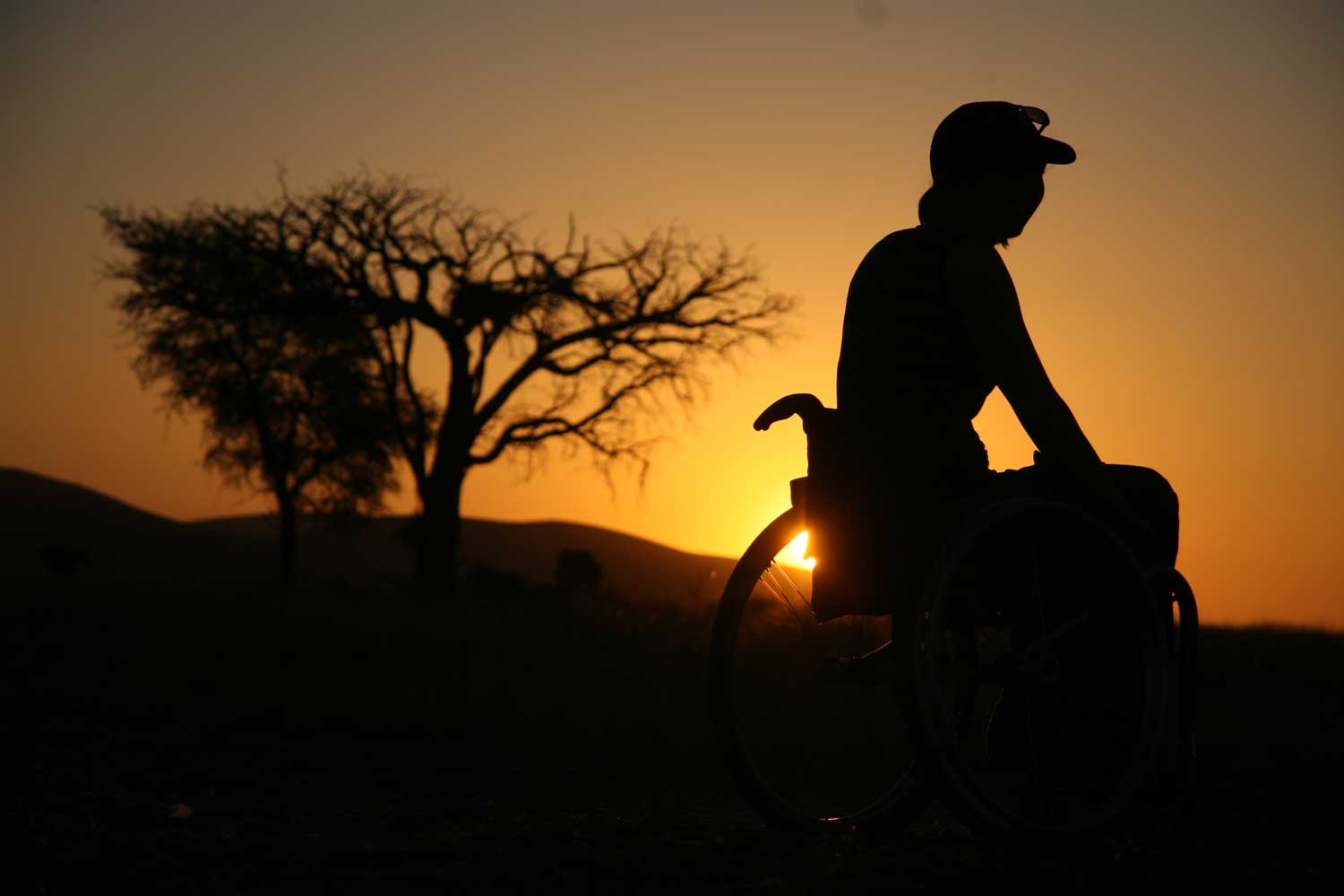 But these immersive safari experiences should not be restricted to the young and fit. From drifting along the Okavango Delta in a mokoro, to sleeping in comfortable beds high above the teeming floor of the savannah, many of these extraordinary encounters are open to everyone – even the physically challenged, thanks to Endeavour Safaris, a travel company that now offers a range of safari options to people with disabilities and medical issues.

So, fittingly, we as open our minds to what a trip to the bush entails, Africa has opened itself up to people of differing abilities and diverging needs and interests – offering us all the chance to fully immerse ourselves in one of the most extraordinary places on earth. And, really, nothing reminds you that you’re alive like the tingle of fear you get from hearing a nearby lion roar while you sip your water under the shade of an acacia tree, preparing to continue your long walk back to camp.

This article originally appeared in the 2017 print edition of THE BEAT.