REPORTING FOR DUTY - We Are Africa

WE ARE AFRICA TAKES ACTION ON CONSERVATION

For the inaugural We Are Africa, conservation was at the top of the agenda with ‘The Conservation Lab’ taking place on 4 May at One&Only Cape Town to kick off the inaugural show. This private event saw the coming together of over 50 conservation specialists to tackle the issues that impact the African wildlife.

All attendees were selected through a submission call last October from We Are Africa on the topic of “What should we as an industry be doing together to boost conservation efforts”. A 500 words submission was a prerequisite to participate in The Conservation Lab in order to ensure relevant content and high levels of buy-in and active participation.

Headed up by Graham Boynton with four panellists including: Collin Bell, Jackson Ole Looseyia, Dereck Joubert and Blessing Munyenyiwa, the aim of The Conservation Lab was to establish the best way for the international travel industry to become more collectively engaged in the conservation of Africa’s fauna and flora.

This debate meant to unify the fragmented discourses of the industry to defend Africa’s wildlife against what Derek Joubert called the “tsunami of poaching” and design collectively a plan of action to save the continent’s environment. The real success of The Conservation Lab will be measured by the early formation of an Advisory Board and critical conservation decisions that follow its formation. 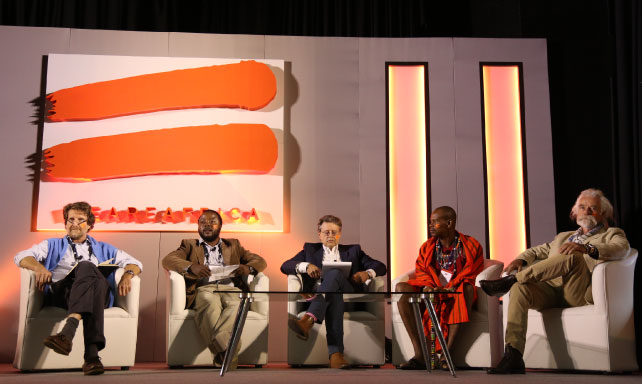